Boys enter at the end of each year in at least two events for the next year on an entry form. During the second week of the 1st term we have shorter school days in order to run heats on Monday to Thursday afternoon before other summer sports practices start. These heats are then used to choose a SACS Athletics team to participate in the first few events of the year. Past accolades and current performances are then used to determine the A-squad for the year to travel to Friday events and participate in the derby Meets. 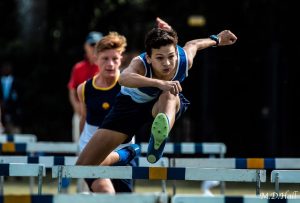 The heats are also used for the Inter-house event in the middle of February. It is referred to as the “SACS Championship” and it is keenly contested. Division races are also included in the program in order to have greater participation and up to 12 athletes can qualify for Field events. The results of the champs are used to select our Quadrangular team where we compete against Bishops, Rondebosch and Wynberg. This is a great event with friendly rivalry between the schools. The athletics season finishes with Friday League meetings in the last term which offers athletes the perfect opportunity to qualify for Colour Awards for the next season.

The athletics season is from September to March the next year in which an athlete is required to achieve twice a required time/ distance in their event(s) in order to achieve awards. The times have not been changed for decades and are set at a high standard.

Athletics is one of the most difficult sports for a young man to participate in. Not only does it require intense discipline to continually do training outside of school practice times, but it also requires intense focus and determination during an event. Nearly all the athletes compete in their events as individuals, without a team or partner to help them as they complete their event. This requires a lot of self-discipline and belief and as such, top-performing Athletes are some of the most mature sportsmen in the school.